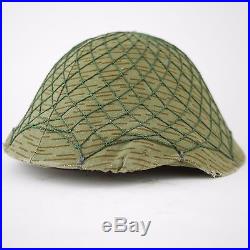 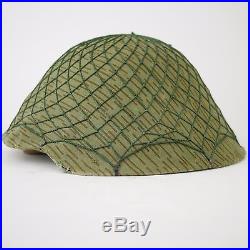 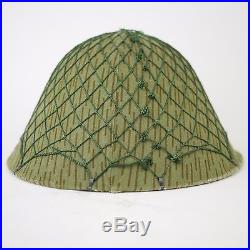 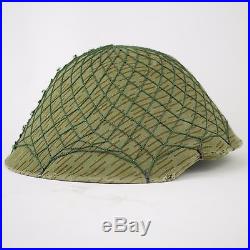 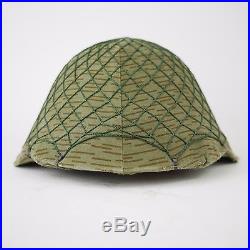 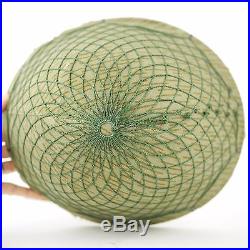 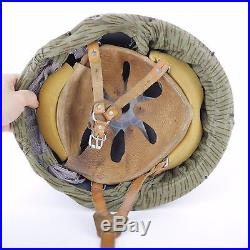 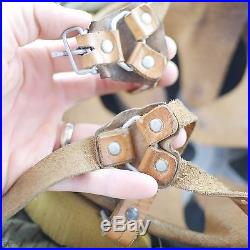 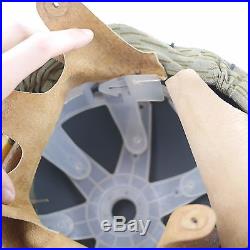 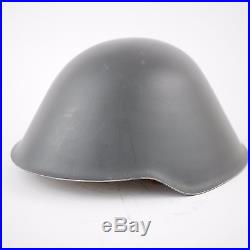 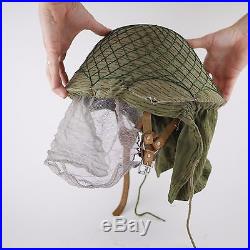 Guinine Post WWII WW2 EAST GERMAN M56 HELMET NVA Cold War DDR w Liner and Camo. Helmet has no exterior rivets which indicates it is post 1966 when they changed the original M56 design. The rain pattern camo cover, chin straps and liner appear to be original. The rain pattern camo cover has some small holes where it appears the net cover hooks have worn into the camo cover. The inside of one of the leather liner flaps is ink stamped’NVA’ and what appears to be’1.1 U’. The small leather string piece that holds the leather liner flaps together at the peak of the interior of the helmet is missing. The camo cover has a piece that drops down the back of the neck. The camo cover also has a netting that drops down in front of the face (mosquito protection). Everything seems to be in great condition. Please carefully examine pictures as they best demonstrate the condition of the item and represent a part of the description. The following is some history of this type of helmet. The East German M56 originated from helmet prototypes designed by the Wehrmacht during WW2. The Wehrmacht wanted a helmet which had superior ballistic properties than any other combat helmet in use at that time. Yet, Hitler rejected these prototypes as he considered them to be far too different in shape from the famous Stahlhelms, even though testing proved their superiority over all other helmet designs. In 1956, the East German Nationale Volksarmee (NVA) was formed and a new helmet design was ordered. The chief engineer in charge of designing the new helmet of the NVA was Kiesen Erich, who worked in the factory Eisen und Hütte AG during the war and had produced helmets model B and B II approved by the Wehrmacht, but rejected by Hitler. Moreover, the factory that produced these helmets at the end of the war was fully intact and located on East German territory. The model B II was selected. Production resumed in January 1956 and the helmet was designated as the M56. The whole process of development, production and distribution of the helmet model 56 was made in a single year. The M56 was produced by Eisen und Hütte AG and the liners by VEB Sattler und Taucha Lederwarenfabrik. In 1966, the liner of the M56 was changed in favour of an adjustable liner mounted on a plastic frame. This liner is held in the shell by 6 rivets welded into the shell. The chinstrap fastened at four points is preserved. These modifications took place in 1966 and the helmet got the designation M56/66. The M56 and M56/66 helmets are often considered to be best steel helmets ever produced as their steep sides were excellent at deflecting rounds. The item “Guinine Post WWII WW2 EAST GERMAN M56 HELMET NVA Cold War DDR w Liner and Camo” is in sale since Tuesday, November 29, 2016. This item is in the category “Collectibles\Militaria\WW II (1939-45)\Original Period Items\Germany\Hats & Helmets”. The seller is “lifeoasis” and is located in Grovetown, Georgia. This item can be shipped to United States.