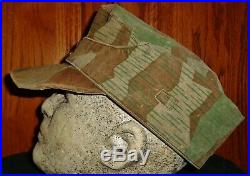 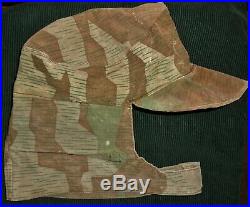 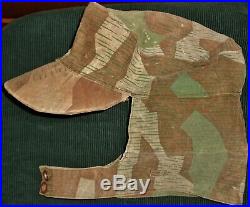 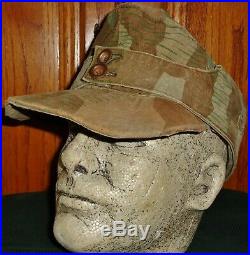 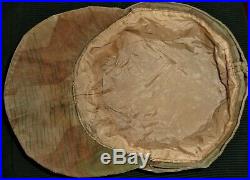 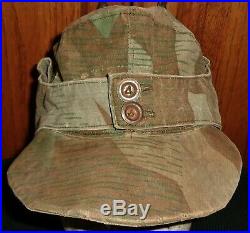 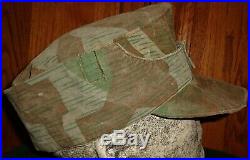 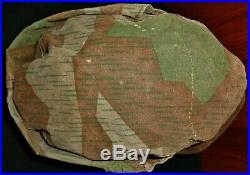 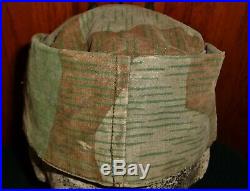 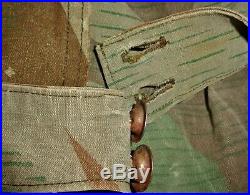 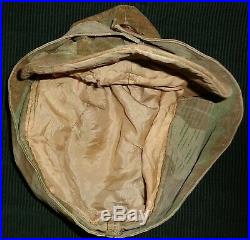 100% Guaranteed Original WW2. WW2 German Elite, Heer, Luftwaffe, Volksturm and HJ, Photographic. Images Exist proving that these Military Branches of the German Wehrmacht used this style of Splinter Camo. Cap, that in most cases. Zeltbahn materials – Splinter Camouflage to produce these rare and very seldom seen original uniform pieces! Traveling, Small companies of Highly trained German Taylor’s, would travel from the Rear in supply, to the front lines, from Unit to Unit, Company to Company, fixing, repairing and making Uniform items for the German Soldiers. This is a known Historical Fact. Every part of the Visor Cap, cotton thread, cotton splinter, lining, steel buttons and visor materials, is Original to WW2, and put together during the most Horrible of times, in a combat setting. Very few of this type of original uniform pieces exist for us to enjoy today. All Correct WW2 German Army Issue Cotton thread was used to sew the cap together and correct style of stitching. There are Absolutely NO Synthetics. Correct seam and lip on the front of the visor, I tried to photograph this, but if the photos are not sufficient, please do not hesitate to ask for more photos. There are also old sewing marks, of when this Splinter material was been used as a Zelt and then taken apart. The Zelt was the German Poncho or Shelter half, it was common for this material to be used to produce other items such as this cap and other Tunics, Trousers, Back packs, etc…. The Photos above, of the Visor cap are of Both sides, inside and out from every angle, If you would like to see other photographs, please do not hesitate to ask. All of the Original Cotton Splinter Camo. Is still in Wonderful condition, the cap was worn during the war, so there is some discoloration of the material from the sun and natural elements. These types of pieces should be kept and saved for all future generations to enjoy, a German Soldier fought for his Honor, his Family and Country while wearing this piece of Uniform Equipment. Head Size is Approx. 59 to 60. Please see my feedback. All of my collector customers from all over the World have left there personal feedback for everyone to see. Please see my other listings, I have Many other Original WW2, U. German, Italian, Spanish and Japanese items. Thank you for looking! The item “Original WW2 German Army Splinter Camo Elite Uniform Cap Hat no insignia helmet” is in sale since Wednesday, June 5, 2019. This item is in the category “Collectibles\Militaria\WW II (1939-45)\Original Period Items\Germany\Hats & Helmets”. The seller is “rusty_ironice” and is located in Montello, Wisconsin. This item can be shipped worldwide.