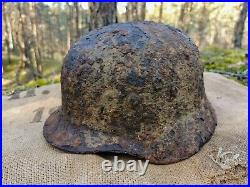 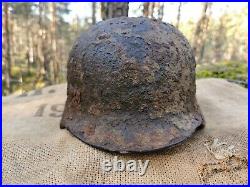 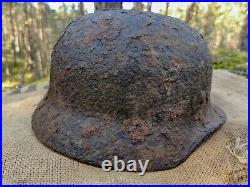 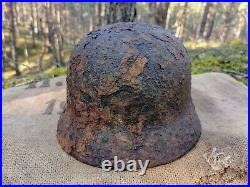 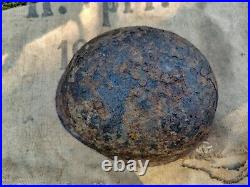 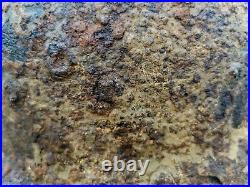 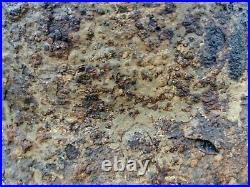 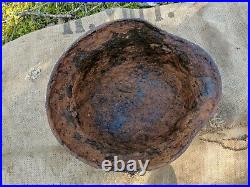 Dug out in Kurland. Dug out on positions of 18. Armee, found without soldier. This seems to eb a helmet of veteran soldier as it has several layers of paint and last layer seems to be camouflage. Great item, will look great in any WW2 collection. Found on a capitulation site north of Skrunda. In this place Germans spent the last night before going to surrender too Soviets, they were dropping their equipment and other unnecessary items. Scroll down to see better photos. Like the previous days the major attack on 23 December took place south of Frauenburg where the 4th Assault Army with 119, 360, 357, 378, 145, 239, 306, 164 and 158 Rifle Divisions stormed against the HKL of 18th Army on both sides of Pampali. The frontline defended by 16th Army was attacked by the 10 Guard Army with 56, 65, 53, 85, 30, 29, 119 Rifle divisions and 7 Guard division and the 42 Army with 2, 268, 256 and 48 Rifle Divisions. The German soldiers defended themselves fuious against this numerical much stronger enemy and was able to hold their lines. The 205 Infantrie-Division repulsed the attack of three Rifle Divisions. The 16th Army along with the 18th Army was cut off in the Courland Peninsula when the Soviets launched their summer and autumn offensives of 1944. It stayed trapped there until the end of the war. After the war, 250,000 German troops trapped in the Courland Pocket were marched into captivity, many were never heard from again. Check my other auctions! All my items are 100% ORIGINAL! This item is in the category “Collectibles\Militaria\WW II (1939-45)\Original Period Items\Germany\Hats & Helmets”. The seller is “thepeculiarrust” and is located in this country: LV. This item can be shipped worldwide.