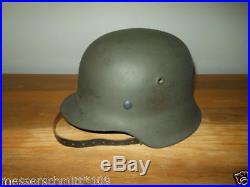 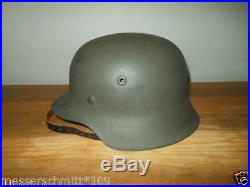 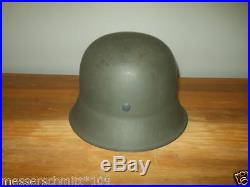 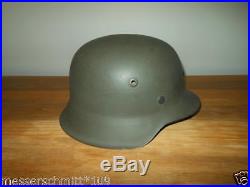 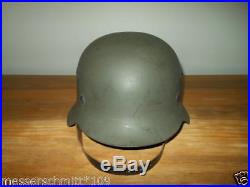 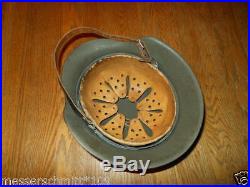 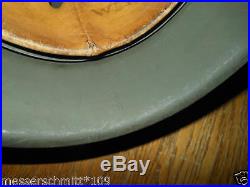 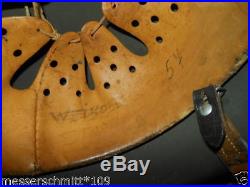 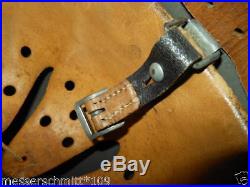 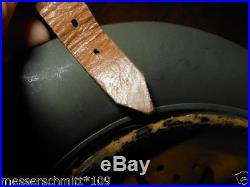 The first “modern” steel helmets were introduced by the French army in early 1915. The German army began tests for their own steel helmet at the Kummersdorf Proving Grounds in November, and in the field in December 1915, experimenting with both captured French and British helmets. An acceptable pattern was developed and approved and production began at Eisen-und Hüttenwerke, AG Thale/Harz, in the spring of 1916. In 1935, the Third Reich developed the smaller, lighter M35 style helmet, and then in an effort to reduce construction time and labor costs, minor modifications were introduced in March 1940 resulting in the M40 helmet. Further construction modifications were undertaken in August 1942 resulting in t. He last wartime upgrade to the standard helmet. At the request of the Army High Command, the rolled edge found on M1935 and M1940 helmets was discontinued as a measure of economy. The M1942 was mass-produced until late 1944 and early 1945 when most facilities were overrun by Allied armies or simply left idle by the lack of sufficient materials for the production of helmets. Initially helmets received a single Heer decal on the left side of the helmet. This was discontinued in 1943 as part of an effort to improve concealment in the field as well as to reduce cost and time of overall helmet production. Colors found on M1942 helmets range from medium to dark field grey. Virtually all helmets show texture of some sort in the paint finish. The texture can be very fine or extremely course. Made of stamped steel, this M42 Combat Helmet is in AMAZING condition! It retains 95% of it’s original paint and finish, with some slight scratches, wear, and marks due to the age. It features a late-war 4 digit serial number, indicating 5229 , and factory and size code CKL 64 ET – E. The helmet band and liner are both ORIGINAL to this helmet, and have not been added post-war. No decals present or appear to have ever been applied (which is normal for due to the year this was captured). Nonetheless, it is one of the nicest I have ever owned, and would make a. PERFECT item for any collection or display! TERMS OF SALE. Most of my items are vintage, and as such are AS-IS, so you must therefore expect a degree of wear due to age and/or usage. ABOUT ME. Although my passion is the Me109, I do offer many other German Aircraft Fw190, Me262, etc. , as well as USAF and Japanese items. Occasionally I do offer many non-vintage items such as prints and art relating to the time period. Use is solely based on my authorization only. The item “WW2 German Wehrmacht Heer M42 NAMED Combat Helmet 100% ORIGINAL NICE” is in sale since Friday, October 13, 2017. This item is in the category “Collectibles\Militaria\WW II (1939-45)\Original Period Items\Germany\Hats & Helmets”. The seller is “messerschmitt*109″ and is located in Malibu, California. This item can be shipped worldwide.