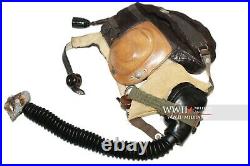 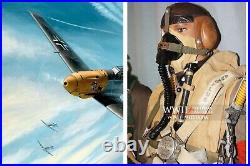 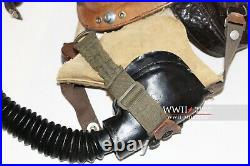 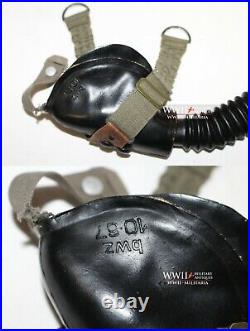 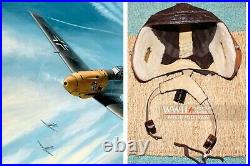 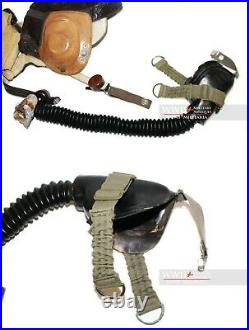 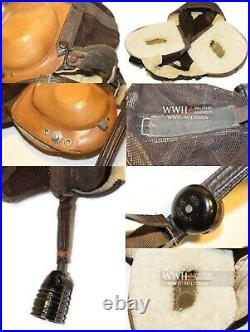 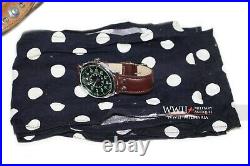 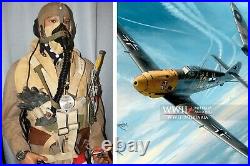 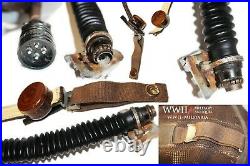 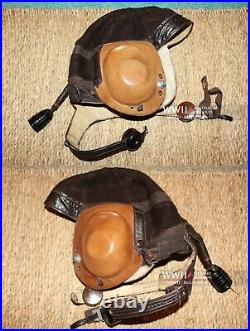 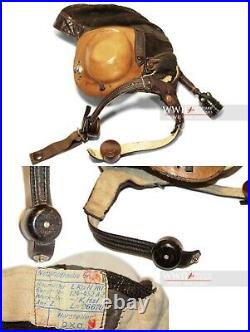 WWII German Luftwaffe Fighter Pilot’s Flight Helmet Dark Net with 3-Strap Oxygen Mask & Mask Face Cover, Polka Dot Scarf & Replica Watch Set. LKpN 101 Netzkopfhaube flight helmet. WWII Luftwaffe x3 Strap Oxygen Mask Set. WWII Luftwaffe Polka Dot Scarf. WWII Luftwaffe Pilot’s Wrist Watch Replica. WWII German Luftwaffe fighter pilot’s large size 66, mint condition and complete LKpN 101 Netzkopfhaube flight helmet with a original 3-Strap bwz 10-67 oxygen mask with face cover, Polka Dot Scarf & Replica Watch Set. The face cover that goes onto the mask is original material and this set comes from the Western Desert, North Africa, brought back souvenir by veteran 8th Army Desert Rats South African soldier Frank Ferreira. This is a very rare complete set, the material cover for the mask has come off but can easily be reattached but it is in our opinion to keep it this way, this is a unique set for the material cover would be much more comfortable in a very hot environment opposed to the leather cover. The overall mask is in good condition, only the hose clip has deteriorated. The oxygen mask, parts, hose and straps are undamaged and a perfect display set. The flight helmet is perfectly preserved as if brand new, this was stored in a dry box in the veterans house. In 1940 Frank Ferreira was a Bofors Flak Gunner and fought at El Alamein and Tobruk, he shot down with Luftwaffe Aircraft and his last kill was a Ju88 Bomber that was also flown as a fighter bomber in the Western Desert but he hit this Ju88 straight in the cockpit with his Bofors Flak Gun while the Ju88 was on a attack run going straight at his gun position at Tobruk and the aircraft burst into flames and slammed into the gun, killing his crew accept for him. He was terribly inured and the blast took off a piece of his hand, he was captured and the German soldier that captured him took pity on him and helped him in his recovery and they became friends, real friends. After the liberation of Tobruk, his friend the German Luftwaffe soldier was killed in action. And after the liberation of Tobruk he joined the 8th Army and became a Desert Rat and also fought along side the LRDG and attacked the airfields at night. After the North African Campaign ended, he was sent off to War in Italy and later saw action in France where he sent off souvenirs back home, a Back Type German parachute, Luftwaffe seat parachute, flight suit and a few boxes of other WWII gear, uniforms, awards, Knight’s Cross and more that all went became part of our Museum Collection that is now all up for sale. Anyone seeking to build up a complete Luftwaffe fighter pilot and numerous other WWII soldiers and pilots, we have it all but only usually one of each piece, same with this set is a once off. The item “WWII German Luftwaffe Fighter Pilot’s Flight Helmet, Oxygen Mask, Scarf & Watch” is in sale since Sunday, December 6, 2020. This item is in the category “Collectibles\Militaria\WW II (1939-45)\Original Period Items\Germany\Hats & Helmets”. The seller is “wwiimilitaria” and is located in Onrus River. This item can be shipped worldwide.